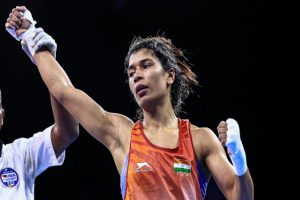 The 25-year-old Indian took full advantage of her long reach and maintained her dominance against the Thai boxer, whom she had beaten in the 2019 Thailand Open semi-final—the only meeting between the two, enroute her silver medal finish. In March 2022, banks’ gross non-performing asset (GNPA) ratio decreased to a six-year low of 5.9 percent from a high of 7.4 percent in March 2021, according to the Reserve Bank of India’s (RBI) most recent Financial Stability Report (FSR).... Read more Three Singaporean satellites were successfully launched by the Indian Space Research Organisation (ISRO) as part of a commercial mission for the New Space India Limited. This was the space agency’s second launch of the year; its first, had put an... Read more The oldest commercial bank in the country, State Bank of India, is celebrating its 67th year on 1st July. SBI descends from the Bank of Calcutta founded in 1806 through the Imperial Bank of India. The Bank of Madras merged... Read more The United States made history as Ketanji Brown Jackson was sworn in as the first Black woman to serve on the Supreme Court. The 51-year-old’s appointment by Democratic President Joe Biden means white men are not in the majority on... Read more The government gave its approval for the 21st tranche of electoral bonds to be issued, and the bonds’ sales. In an effort to increase openness in political fundraising, electoral bonds have been proposed as a substitute for financial contributions to... Read more At the renowned Diamond League competition in Stockholm , Olympic champion javelin thrower Neeraj Chopra won his first-ever medal after breaking his own national mark twice in a month.Chopra had a tremendous throw of 89.94 metres and placed second at... Read more In an investment agreement (IA) signed by Google and Airtel, the buyer offers to buy a 1.28 percent minority and non-controlling part in the company’s equity share capital. The roughly $1 billion for 1.28 percent investment in Bharti Airtel by... Read more International Day of Cooperatives is marked annually on the first Saturday of July. This year, the day will be observed on 2 July to highlight the contributions of the cooperative movement. The aim of this celebration is to increase awareness... Read more