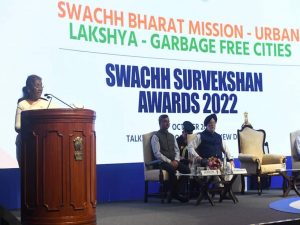 Indore bagged the title of India’s cleanest city for the sixth time in a row as the results of the Central government’s annual cleanliness survey ‘Swachh Survekshan Awards 2022’ were announced. Madhya Pradesh secured the first position in the category of best performing states, followed by Chhattisgarh and Maharashtra.

As per the survey results:

The department is implementing two flagship programmes: Swachh Bharat Mission Grameen (SBM-G) and Jal Jeevan Mission (JJM), of the central government. The SBM-G was launched on October 2, 2014, with the aim to stop open defecation. All villages in the country were declared open-defecation-free five years later. Thereafter, SBM-G 2.0 was launched in 2020 to sustain the ODF status in villages and improve the level of cleanliness in rural areas through solid and liquid waste management, thereby making villages ODF-plus.

What is Swachh Survekshan?

Swachh Survekshan is the world’s largest urban sanitation and cleanliness survey which has been conducted by the Ministry of Housing and Urban Affairs since 2016. The government said that Swachh Survekshan has been instrumental in fostering a spirit of healthy competition among towns and cities to improve their service delivery to citizens and towards creating cleaner cities. It aims to encourage large-scale citizen participation and create awareness amongst all sections of society about the importance of working together towards making towns and cities better places to reside in.

The scale of Swachh Survekshan is evidenced in the consistent increase in the number of cities over the years. From surveying 73 major cities in 2016 and 434 cities in 2017, the 7th edition of Swachh Survekshan has become became the world’s largest urban cleanliness survey, with 4,355 cities having participated in the survey. This year’s survey with a “People First” theme captured an unprecedented number of citizen feedback this year – over 9 crores, a marked increase from last year’s 5 crores.