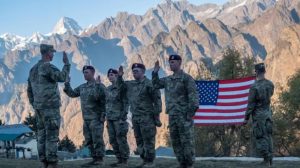 In a first, four US Army officers part of the 11th Airborne Division were promoted high up on Nanda Devi, India’s second-highest Himalayan peak, during the 18th edition of India-US joint military exercise ‘Yudh Abhyas’ in Uttarakhand. Capt. Cerruti, Lt. Russell, Lt. Brown and Lt. Hack became the first four USArmy Officers to be promoted in the Himalayas during Yudh Abhyas Exercise. US soldiers of 2nd Brigade of the 11th Airborne Division and Indian Army soldiers from the Assam Regiment are part of the two-week joint military exercise.

About the Yudh Abhyas:

Yudh Abhyas is conducted annually between India and the US with the aim of exchanging best practices, tactics, techniques and procedures between the armies of the two nations. The aim of the exercise is to enhance interoperability and share expertise in peacekeeping and disaster relief operations between the two armies. The joint exercise will also focus on humanitarian assistance and disaster relief (HADR) operations.

Nanda Devi is the second-highest mountain in India, after Kangchenjunga, and located entirely within India (Kangchenjunga is on the border of India and Nepal). It is in the state of Uttarakhand (Chamoli district). It is the 23rd-highest peak in the world. The Nanda Devi Peak is a part of the Garhwal Himalayas.